An Update from uniQure About AMT-130

Lexington, MA and Amsterdam, the Netherlands, June 23, 2022 — uniQure N.V. (NASDAQ: QURE), a leading gene therapy company advancing transformative therapies for patients with severe medical needs, today announced safety and biomarker data from 10 patients enrolled in the low-dose cohort of the ongoing Phase I/II clinical trial of AMT-130 for the treatment of Huntington’s disease. Six of the 10 enrolled patients received AMT-130, and four patients received an imitation surgical procedure in this randomized, blinded clinical trial being conducted in the United States.

“We are encouraged by this 12-month update on the patients enrolled in the low-dose cohort,” stated Ricardo Dolmetsch, Ph.D., president of research and development at uniQure. “Thus far in the clinical trial, AMT-130 has been well-tolerated, with no serious adverse events related to the gene therapy and NfL levels approaching baseline. We are also pleased to observe trends suggesting target engagement that are supported by the lowering of mHTT protein in evaluable patients receiving AMT-130. We look forward to presenting additional clinical data, including functional outcomes, on all patients from this important study next year.”

One-Year Observations on Low-Dose Cohort of AMT-130 The 10 patients enrolled in the low-dose cohort were all clinically diagnosed with early-stage Huntington’s disease with CAG repeats between 40-44, baseline Total Functional Capacity scores of 10-13, and Total Motor Scores of 7-23. Four patients were male and six were female with ages ranging from 34-58 years old. Demographics of the six treated patients were generally consistent with the four control patients.

Key observations at 12 months of follow-up on the low-dose U.S. cohort include: • AMT-130 was generally well-tolerated in treated patients at the lower dose of 6x1012 vector genomes. * No serious adverse events related to AMT-130 were reported in these patients. Two serious adverse events unrelated to AMT-130 occurred: a deep-vein thrombosis in the * elbow in one patient that resolved with anticoagulants and transient post-operative delirium in a second patient that was resolved through supportive care. * No adverse drug reactions or serious unexpected adverse reactions were reported. * Structural magnetic resonance imaging did not reveal any clinically meaningful safety findings in treated patients at one year of follow-up. 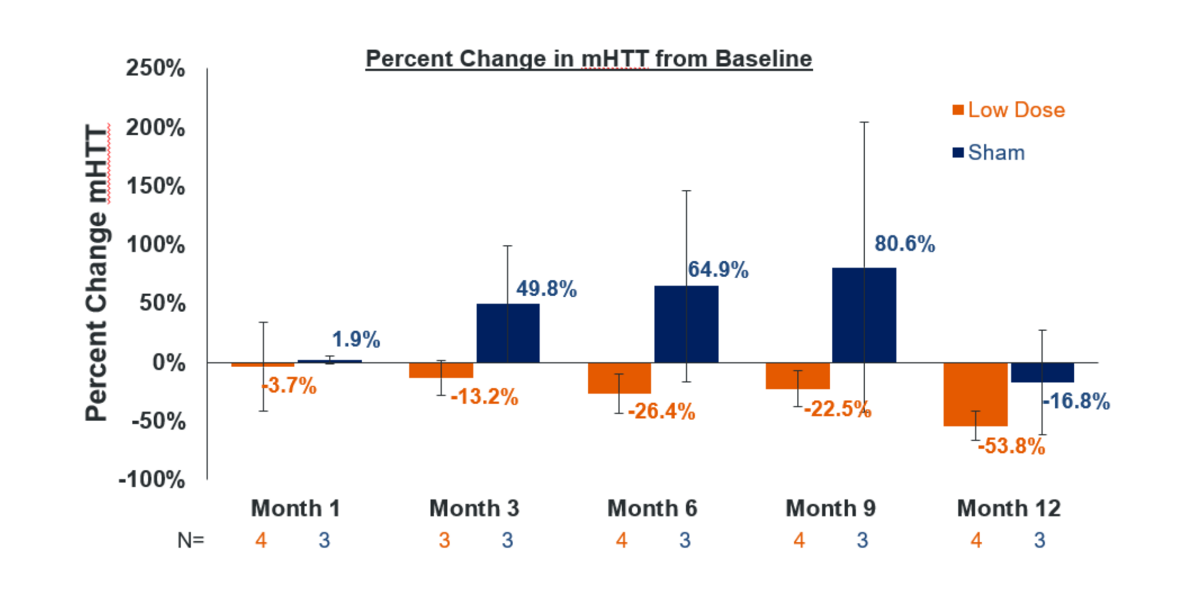 “We have made excellent progress in our clinical investigation of AMT-130 and now have a total of 36 patients enrolled across our two Phase I/II clinical studies in the U.S. and Europe,” stated Matt Kapusta, chief executive officer of uniQure. “Enrollment in the high-dose cohort of our open-label European study is well underway and is expected to be completed by the end of this year. We look forward to continued collaboration with the Huntington’s disease community to advance AMT-130 as a potential treatment for those living with Huntington’s disease.”

About the Phase I/II Clinical Program of AMT-130 The U.S. Phase I/II clinical trial of AMT-130 for the treatment of Huntington’s disease is exploring the safety, tolerability, and efficacy signals in 26 total patients with early manifest Huntington’s disease split into a 10 patient, low-dose cohort followed by a 16 patient, high-dose cohort; patients are randomized to treatment with AMT-130 or an imitation (sham) surgery. The multi-center trial consists of a blinded 12-month core study period followed by unblinded long-term follow-up for five years. A total of 16 patients in the clinical trial will receive a single administration of AMT-130 through MRI-guided, convection-enhanced stereotactic neurosurgical delivery directly into the striatum (caudate and putamen). Additional details are available on www.clinicaltrials.gov (NCT04120493).

uniQure also plans to initiate a third cohort in the ongoing U.S. Phase I/II clinical trial that will explore the use of alternative stereotactic navigation systems to simplify placement of catheters for infusions of AMT-130. This will be explored in two steps and include up to 18 additional randomized patients who will receive the higher dose of 6x1013 vg. uniQure expects to complete patient enrollment in this third cohort by the end of 2023.

The European, open-label Phase Ib/II study of AMT-130 will enroll 15 patients with early manifest Huntington’s disease across two dose cohorts. The low-dose cohort of six patients completed enrollment in March 2022. Together with the U.S. study, the European study is intended to establish safety, proof of concept, and the optimal dose of AMT-130 to take forward into Phase III development or into a confirmatory study should an accelerated registration pathway be feasible.

About Huntington’s Disease Huntington’s disease is a rare, inherited neurodegenerative disorder that leads to motor symptoms including chorea, and behavioral abnormalities and cognitive decline resulting in progressive physical and mental deterioration. The disease is an autosomal dominant condition with a disease-causing CAG repeat expansion in the first exon of the huntingtin gene that leads to the production and aggregation of abnormal protein in the brain. Despite the clear etiology of Huntington’s disease, there are no currently approved therapies to delay the onset or to slow the disease’s progression.

About uniQure uniQure is delivering on the promise of gene therapy – single treatments with potentially curative results. We are leveraging our modular and validated technology platform to rapidly advance a pipeline of proprietary gene therapies to treat patients with hemophilia B, Huntington's disease, refractory temporal lobe epilepsy, Fabry disease, and other diseases. www.uniQure.com

uniQure Forward-Looking Statements This press release contains forward-looking statements. All statements other than statements of historical fact are forward-looking statements, which are often indicated by terms such as "anticipate," "believe," "could," "estimate," "expect," "goal," "intend," "look forward to", "may," "plan," "potential," "predict," "project," "should," "will," "would" and similar expressions. Forward-looking statements are based on management's beliefs and assumptions and on information available to management only as of the date of this press release. These forward-looking statements include, but are not limited to, whether we will be able to evaluate data on a larger number of patients or over a longer period during the ongoing study; whether full safety and efficacy data from the Phase I/II clinical trial will be available for cohorts 1 and 2 in the first half of 2023 or ever; whether 16 patients or any patients in the clinical trial will receive a higher dose administration of AMT-130; whether we will initiate a third cohort in the ongoing U.S. Phase I/II clinical trial in the second half of 2022 or ever; whether the European study will establish safety, proof of concept, or the optimal dose of AMT-130 to take forward into Phase III development or into a confirmatory study or for any purpose; and whether an accelerated registration pathway will be feasible or available at all. Our actual results could differ materially from those anticipated in these forward-looking statements for many reasons, including, without limitation, risks associated with the impact of the ongoing COVID-19 pandemic on our Company and the wider economy and health care system, our and our collaborators’ clinical development activities, clinical results, collaboration arrangements, corporate reorganizations and strategic shifts, regulatory oversight, product commercialization and intellectual property claims, as well as the risks, uncertainties and other factors described under the heading "Risk Factors" in uniQure’s periodic securities filings, including its Annual Report on Form 10-K filed February 25, 2022 and Quarterly Report on Form 10-Q filed on May 2, 2022. Given these risks, uncertainties, and other factors, you should not place undue reliance on these forward-looking statements, and we assume no obligation to update these forward-looking statements, even if new information becomes available in the future.