The shimmer of light aqua blue light shining from light sticks. One by one until hundreds of friends in that room were holding a light stick that shined across the giant room filled with the best friends that I would ever meet….the best day of my life.

Before I get into detail of that amazing day I want to back track a bit. It was 3 days before that night we packed up and drove to Louisville KY and went to a hotel to stay while we went for the HDSA convention. It was 3 years after we found out that my mom, grandma, and great grandpa that had passed away, had HD. HD was a disease that effects the brain cells and destroys them. Since brain cells can’t be recreated at this point, there is no cure. HD is also hereditary, which means me, my uncles, aunts, and siblings are at a fifty present chance of getting HD. So are my kids if I have kids. Now I’m driving to Louisville KY to go to this convention that I’m able to talk to people my age about what I’m going through and be able to relate to them.

Now after the 3 hour drive to Louisville we stopped at the hotel and got the room key and unpacked, we would be staying there for 3 days. We had nothing planed that day but for tomorrow we would have lots to do! My parents, sister and I woke up about 8:00 am and went across the bridge that connected the two hotel buildings together and went downstairs to eat breakfast. After breakfast we meet a woman named Chandler. She worked with a friend of my mom’s named Matt, Matt made the Huntington’s disease youth organization (HDYO).

We got to talk to her and she asked my sister if she wanted to join the talent show on the last day, she eagerly said “YES! I can sing my favorite song!” at that point I didn’t know what song she was talking about because she changes her favorite song every week. Then Chandler asked me if I wanted to help her and Matt with selling some merchandise at their stand with matt. My mom had always told me about Matt and how fun he is and I wanted to meet him so I said yes. About an hour later we went to our “classes” or age groups in rooms so we could meet each other and tell each other our story of Huntington’s disease and how it’s impacted us.

After the classes were over I went to where Chandler told me to meet her and there were my mom, Matt and Chandler. At this point i haven’t meet matt yet so I was really enthusiastic to meet him. “Hi Gavin, I’m Matt.” He said to me. First thing I realize right then and there is that he was British just by his accent. “Gavin, he’s from the UK” my mom said like I didn’t already know.

“Nice to meet you Matt, my mom has told me a lot about you” I said joyfully, still amazed by his accent every time he would talk I would laugh. “Nice to meet u too Gavin, I’ll be working with you and Chandler” he said. As we stayed in that room with other people working at the other booths that were selling other merchandise, we were selling t-shirts with the HDYO logo, sunglasses, cups, yo-yos, stress balls, key chains, and all varieties of different things.

As we were working, I asked Matt about how HD has affected him and he told me that his dad had it when he was young and he had to take care of him. While I’m hearing him talk tell me that I think about how my life would have been like if I my mom was at a really serious state of Huntington’s disease…I wouldn’t be able to hang out with buddies or have fun or anything. He also told me he tried to run away from home because of the anxiety of it.

Before the dinner in the auditorium, Matt told me that he was doing an interview video about young people affected by HD, and he asked me if I wanted to do it. I said cheerfully “YES, I’d be glad too!” At the end of that day I got to hear a bunch about Chandler and Matt. It would be today that I would do the interview video and tomorrow would be the two nights until I would leave. We woke up the next day and walked around until Matt showed up. “Are u ready to go?” “yup!” I said excitedly. 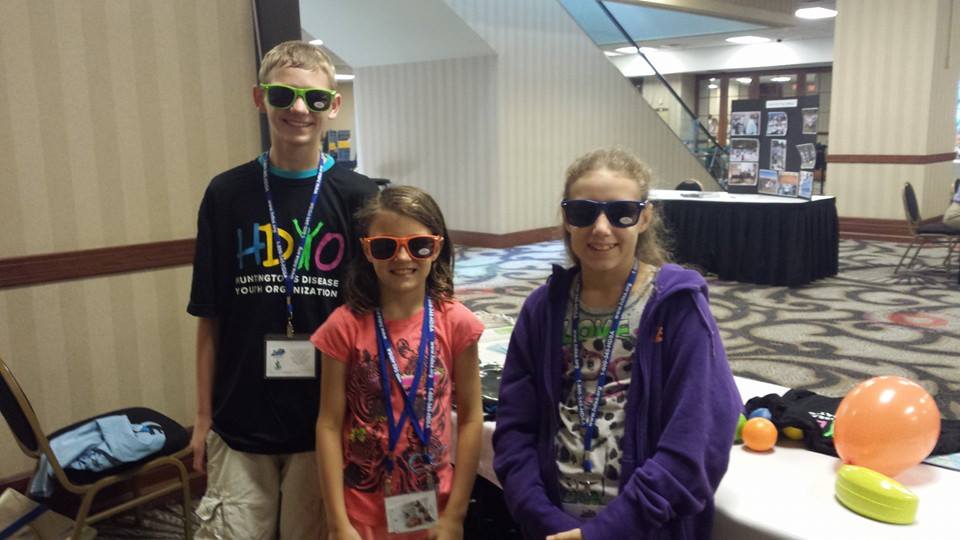 We went to a room where there was equipment set up for the interviews. “This is going to be fast and easy, I’m going to ask you simple questions, ok?” “First question, who in your family has HD?” “My mother and grandmother have it and my great grandpa past away from it and me, my sister, uncles, aunts, and kids are at risk of having HD” I said hesitantly. “Ok, next question, what are some symptoms you have noticed with your loved ones that have HD” “Mood changes, irritability, not wanting to ever do anything, memory loss, and movement problems…she can’t walk without falling, she uses a wheel chair now. There were other questions after that but those were some of the main questions. Matt also made all the other 20 people’s interviews into a big video for everyone to see.

Then we had the dinner and stayed a little bit, talked to friends, meet new friends, and my mom introduced me to one of her friends that had a daughter about the same age as me her name was Kelly. I knew that name from the list of people who would be in the talent show that night, she was singing am I wrong? Kelly was cute, long blonde hair. That night after the dinner we went into the other auditorium for the talent show there were plenty of people that were good at something. I thought about doing something in the talent show but I felt like I wasn’t really “good” at anything.

My sister, Aidan was one of the younger kids doing something. She got up on stage and the music turned on and I observed what song she was going to sing. It was Halo. I guess she got stage fright because right through the middle of the song she stopped. For a while it was just silent then someone started a beat for her then all of a sudden everyone started clapping a beat. Then she finished singing the song and everyone cheered. It was Kelly’s turn now and the song began. In my head I was singing along to her singing the song. Am I wrong…? For thinking we could be something for real? Am I wrong…? For saying I choose another way? Her singing was astonishing to not only me but to everyone.

The day after the talent show was the dance and the last day I would be there. At about 7:00 we all went to the main auditorium and had a big dinner with everyone. Some people gave a speech. Every year there is a ceremony to remember the people impacted by HD. While we were eating we all asked why there were light sticks at our table. They told us not to touch them. When we all got done eating someone gave a speech about and to the people that have HD and the people who have got impacted by HD. Then all of a sudden the lights go out!

I’m confused and wondering why the lights were out. They said “Everyone grab the light sticks that are at your table and one by one break them and raise them in the air.” All I could see was the shimmer of light aqua blue light shining from light sticks. One by one until hundreds of friends in that room were holding a light stick that shined across the giant room filled with the best friends that I would ever meet. It’s amazing to see that light of everyone that knows what you have went through and knows how you feel. It’s difficult to have friends that know how you feel because they don’t know how you feel…but here…it’s a great feeling to have.

Now it was time for the dance. At first I didn’t really want to dance because I don’t really know how to dance. I was never really good at dancing but everyone that I met there like Chandler, Kelly, Matt, and some others were telling me I should have some fun. I didn’t mind going up to dance, I was never the kind of person who cared about what others had to think of me, but for some reason I just didn’t want to get embarrassed…I went up there anyway. We danced until almost 12:30 and I danced with everyone! Then Matt told me he had to go to bed because he had to leave tomorrow and he didn’t want to miss his flight. It was hard to say goodbye to everyone. I said goodbye to Matt and we got some pictures with him before we left. We went to bed and woke up and said our last goodbyes to everyone before leaving.

This trip to the HDSA convention changed my life so much in the 3 days of being there. I got to hear the stories of other people and tell mine. It’s nice to have people you can talk to and they know how you feel. This was without a doubt the best 3 days of my life.