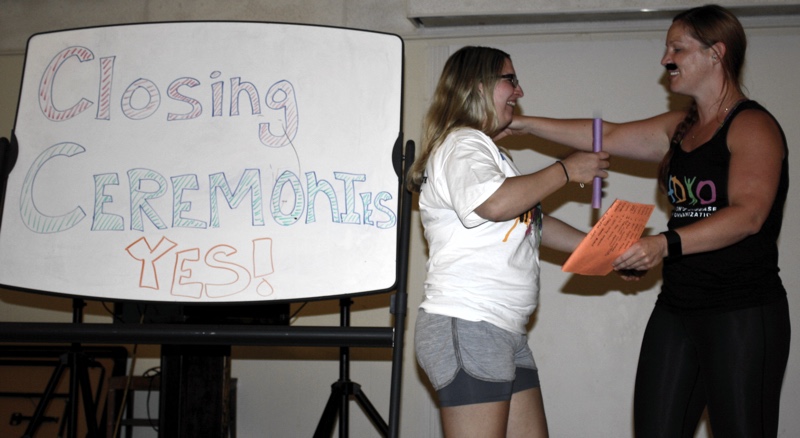 If I could sum up this North American HD Camp in a few words they would be: inspiring, helpful and life changing. I did not think that I would leave camp with tears of both happiness and sadness. I most definitely did not think that I would form such a close bond with all of the campers and staff. I honestly added family members, not friends to my circle, and that is an amazing feeling in itself.

I had a thirty minute flight over to Washington D.C. with another camper. When we landed we met up with the HDYO (Huntington’s Disease Youth Organization) Crew and other campers that had landed before us. We all ate and got to know each other better. It was so interesting to meet people from all over the United States and Canada (also the UK and Scotland) and compare New York to each state or country. After every camper landed, we got on a bus and travelled an hour and a half from D.C. to Camp St. Charles in Maryland. There were already people at the camp waiting on us to start all of the fun. When I got off the bus we were greeted by everyone but I was also greeted by my sister which was nice! Once we were all settled, we did a bunch of name games and exploring the camp. We had certain times for different activities. It was a long and tiring day of traveling for everyone, so we basically just relaxed and got a chance to meet all 43 campers. We ended the night with a bonfire, and sing-a-longs. Lights out was at 11pm, and I’m pretty sure a lot of people went to sleep even before 11. The next day would be a lot more serious and learning about HD. So, we went to sleep to be awake at 8:30am the next day.

Each day started the same, with breakfast and time to talk to one another. We had to break into random groups that we would be with the rest of the camp. I hadn’t yet spoke to anyone that was placed into my group so I was a bit nervous. For our first session I did not speak much, I held back a little bit because I wasn’t really sure what to say or where to start. A representative from Teva Pharmaceuticals joined my group to listen in and learn more about what it is like to be apart of an HD family, so that he could report back to doctors and his team at Teva. Our session on grief and loss was a big one. It was emotional, and we had to say what those words meant to us. The first thing to come to my mind was the loss of money. I told my group how you don’t even realize you’re putting so much money into the HD family member until it is too late and you’re hanging by a thread. I told them that because of all the money my family has put into my mom, I may not be able to finish up my college career. Other than that one part, I was fine, no tears and all ears that were ready to learn. I was able to hear other stories and it was amazing to me that we all had so much in common. I was able to relate to them on a level no one else could even understand. It seemed to me that each hour I was making a new friend, hearing a new story and that just shows how easy it was to talk to people and approach them. We had a lot of activities to participate in to keep us occupied so HD was not always on our minds. There was an optional session to discuss testing. I knew that was a session I wanted to go to. I learned the stories of some who were tested and others like me, who were waiting. It was very informational and helpful to hear what exactly the testing process entailed. That night, we had another campfire, only this time we were told to write down our fears and be prepared to throw those fears into the fire. Let me tell you, it was such an emotional end to the night. The most incredible thing is that we all only knew each other 24 hours, yet we all came together like a family to give out hugs, love and support each time someone spoke about their fears. I honestly could put all of my love and trust into these people just after a day, if that does not show how strong the bond was, then I do not know what does.

We woke up, had our breakfast and started the day with some group fun! We did archery, rope obstacles/trust falls and canoeing and a giant swing! This was a whole lot of fun and we just got to bond more with our small groups. After all of the fun, we broke into age groups to talk about some more serious topics. The topics this time were: communication and relationships, and support. This was now a new group of people (even though I have met and talked to them all) to hear and tell stories to. It was very emotional and basically the entire group was in tears for multiple reasons. We talked about how to tell your friends about the HD person in your life, how to tell significant others and how to talk to other family members. We also spoke about getting tested and having long-term relationships, marriage and havin children. Hearing all the opinions and ideas people had really helped to kind of think more into my future. At one point we got a bit off topic but that was because some of us had things on our minds that needed to come out, and that was perfectly fine. I brought up how communication with my mom is hard. I told the group how it is hard for me to tell my mom I love her sometimes because I fear it will be my last time. The mind is a crazy and powerful thing, it makes up scenarios and literally keeps you from saying and doing things you want to say and do. That is exactly what happens to me. This session was extremely helpful for me and had me let things out that I had not even come to terms with myself. The support in the room was incredible and really made me feel that I am not alone, not only from other campers but the volunteers and their experiences and knowledge just made all the difference. There was also an optional caregiving session, which I also attended. This brought up things like aromatherapy and massage therapy as well as what to do if your HD family member insists on smoking still. From there we moved onto closing ceremonies. We had a little party where we were called up by name and given an award. My award was “nurturer,” which fits me so well, anyone would agree with that because I’m always being the mom of the group, I like to be! We all cheered each other on when names were called and just sang along with the music playing, we were all smiles. Later on we tie-dyed some HD Youth Camp t-shirts and listened to some music, danced, sang and just talked to each other because the next day we would be leaving. A group of friends and I made a solid argument as to why we should have curfew to be a bit later than usual, and it worked! So we all got to spend some more well needed time with each other, it was an overall amazing night.

The last day was a day many of us were excited about but sad about. Excited, because Dr. Jeff Carroll, a neuroscientist was there to teach us about the science behind Huntington’s Disease and share his story. Sad, because we all knew that after his two-hour lecture we were all going to have to say goodbye to each other. We all walked to the chapel where Jeff was giving his lesson, and all eyes were on him. He taught us about DNA, genes, chromosomes, CAG repeats and the basic science behind it. He also answered a lot of questions that people had, and that was really helpful even to me because some campers asked questions I had not even thought about before. Then Jeff went into explaining the human trials. As of last month the only trials with gene silencing drugs were being done on animals such as mice. As of THIS month, the gene silencing drugs are being tested on HUMANS! (I will do a blog entry on gene silencing) Roughly thirty-six (I believe) HD symptomatic people will be testing these drugs for eighteen months and when that proves to work (which I have hope that it will) then the trials will be geared toward PRE-symptomatic patients. This is HUGE for the HD community, and Jeff said that if it does not work, he will buy all the campers a beer(when we reach legal age) because that is how confident in it he is. We were told that Huntington’s Disease made more money for research than Alzheimer’s this year, which is so crazy! Just hearing such amazing news like that literally brought tears to my eyes. For me, this gene silencing working means that IF and only IF I test positive for HD, I can have it halted. This is NOT a cure, but this is 100% a step in the right direction and an incredible step forward for all those with HD. Anyways, after Jeff spoke and gave us all the boost we desperately needed, it was time for a small group of campers with early flights to leave, and one of those campers was sadly me. I had my stuff packed, and had to go around the cafeteria saying goodbye to my new FAMILY, my new best friends. I was a wreck, I cry over almost anything, but when it comes to leaving people who mean so much to me, I lose it. I said goodbye to my sister, as I would not be seeing her until December, I got in the car, and waved, knowing I won’t be able to see these amazing people for quite a while, and some maybe never again. This camp… was EVERYTHING to me. These people ARE everything to me, and that will never change.

So, to finish this all up, I have had the best experience of my entire life in just four short days. I met people who I trust with all my heart, and that I know I can call up and talk to whenever needed. It is crazy to feel such a closeness to people just because you have one major thing in common. These campers were complete strangers to me, and now they are my HD Family. I just want to thank Chandler, Matty, Kat, Lindsey, Jamie, Seth, Catherine, Doug, BJ, Ann, Gwen, Misty and Morgan for setting this up, volunteering, sharing your stories, giving support, and just making this such an amazing experience! I also want to thank each and every one of the campers for listening to me, dealing with all my crying and just being genuine and caring people. I hope to see you all in the future, and hopefully maybe at next years Camp(fingers crossed) or convention!!!

Thank you to my readers, I hope you got a little taste of how camp was for me! 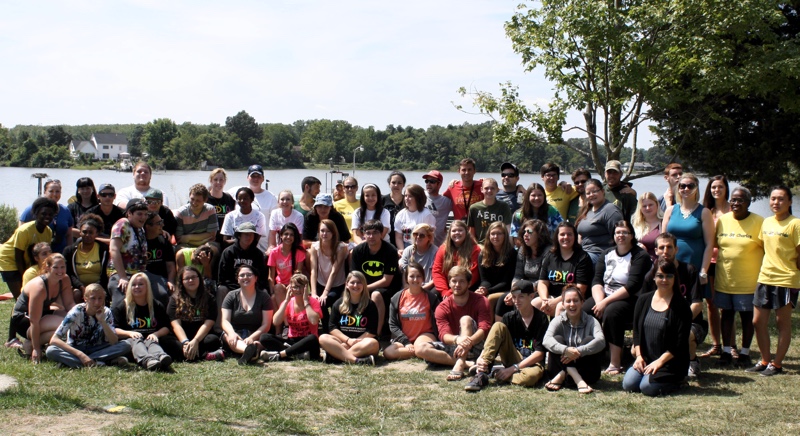