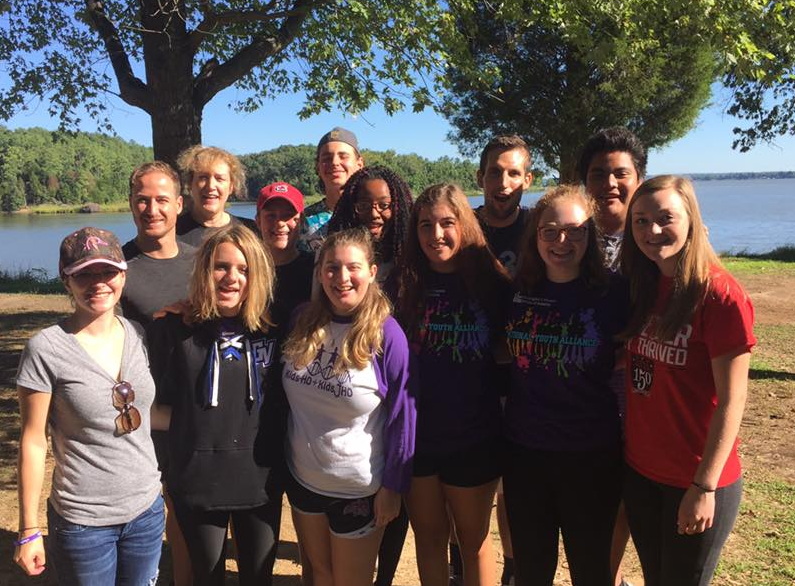 After spending four days with so many inspiring young people I have decided to write for an audience that isn’t my notebook stored away in my desk drawer. I have shared my experience at the 2016 North American Huntington’s Disease Youth Camp with everyone I have had the chance to, but I feel I haven’t done the camp justice with my spoken words.

The HD community was a foreign idea to me just a few months ago, so applying to attend a camp hours away from home with over fifty strangers hadn’t so much as crossed my mind. I had always been hesitant to get involved with the HD community. I liked the idea, but was afraid to ever actually attend an event. So when my cousin shared her camp experiences from the previous year and encouraged me to apply, I was a bit uncertain. After thinking and with a little negotiation with my parents, I submitted an application. I experienced several emotions towards the four day weekend. My most vivid emotions were those that I felt the week leading up to camp; they can be summarized by “I’m not going.” The thought of discussing HD, something I hadn’t even personally dealt with, with a group of strangers was terrifying. My anxiety was through the roof and I was ready to convince my parents that I didn’t really need to go anymore. But thankfully, I traveled to Maryland and began a life changing journey.

Day One: After landing in D.C and discovering we had missed the first bus by a few minutes, I think we both dreaded waiting any longer to get to camp. But soon, we were surrounded by a dozen other campers and sitting on the airport floor in a circle talking and laughing effortlessly; this was my first of many experiences of family throughout the weekend. Hours later we arrived to camp and began our ice breaker activities – which are always my least favorite as someone who focuses more on not sweating or stuttering than actually listening when meeting new people. Learning twenty plus names and facts was overwhelming to say the least and that was only half of the campers.

Day Two: The events of the second day were what I had looked forward to most, but were also what I was most anxious about. I was put into a group with nine campers and four leaders, The Brits in Training. This was the group of strangers that I would be discussing grief and loss, and care giving with. I have never heard the stories of anyone outside my family and had only discussed my own story with less than half a dozen friends, so I was more than a little out of my comfort zone. After introducing myself and sharing how HD affects me through tears, I was mostly quiet and absorbing the input of my group. I was awe inspired by the strength and wisdom that these young people possessed.

Day Three: Emotionally, I was exhausted but somewhat prepared for the discussions of the day. We were split into small groups by age. Our topic of the day was communication. At the end of another long day of absorption and inspiration, our group leader asked us what our “ah-ha” moment of the day was. This was easy for me to answer; my moment came from a fellow Michigan girl that was in both of my small groups; she described taking care of her father with HD as her “lifestyle” not a “burden”. Growing up watching my mother suffer from HD, I always had some pent up anger and a feeling of self pity. Although I am ashamed to admit it, HD was a burden to me. But this different way of thinking was a revelation for me. I had never considered this disease being a part of my lifestyle. My “ah-ha” moment was a shift of negative to positive thoughts and feelings towards my life and HD’s part in it.

The positivity continued later that night when Lysle Turner shared his unbelievable story with us. After his first attempt at climbing Mount Everest was cut short by nature, he redemptively planted a South African flag, with the names of two-hundred people suffering from HD, at the top of the world. Sitting in the chapel with fifty-five other youth, and over a dozen volunteers was a feeling of ease, comfort, and empowerment that I will never forget.

Day Four: Again the positvity continued into our last morning at camp. It was a morning of hope. Dr. Jeff Carroll spoke with us about HD research that is taking place around the world. I can’t imagine any better way to end our time at camp. But, with saying goodbyes came some personal regrets. I didn’t have any tears to hold back, or long hugs with other campers. There were still some that I had never spoken to, and didn’t know their names nonetheless their stories. The regret continued while riding on the bus that stole us away from camp. I didn’t share like I wanted to. I didn’t make those lifelong friends like I had expected to.

However, after having some time to reflect on my experience with a bunch of strangers in the middle of no where, I can truthfully say that camp was life changing. I realized that I didn’t share because I wasn’t ready to; absorbing the stories of other young people and understanding that I am far from alone in the fight against HD was what I needed. Camp left me with a genuine sense of family. I am amazed by the bond I feel with each and every camper that attended, even if I never spoke to them. Each and every person in attendance was able to empathize with one another – a feeling that I don’t think I could ever find in any other place than HD youth camp.Seeing messages consistently pop up in the group chat, and posts of encouragement on the group page has continued my sense of an HD family.

I want to thank every one of the leaders. Your transparency, understanding, support, and encouragement have impacted me far more than you will ever know.

I also want to thank every young person that was in one of my groups. Your openness, strength, and courage have inspired me and offered me a sense of hope.

You can visit Selena’s blog here.