The HD Gene: Under the microscope

Huntington’s disease is caused by an expansion in one specific gene, in a person’s DNA. This article explores the gene in question and takes a look at this ‘expansion’. We will also use family trees to show how the gene is inherited and passed on. 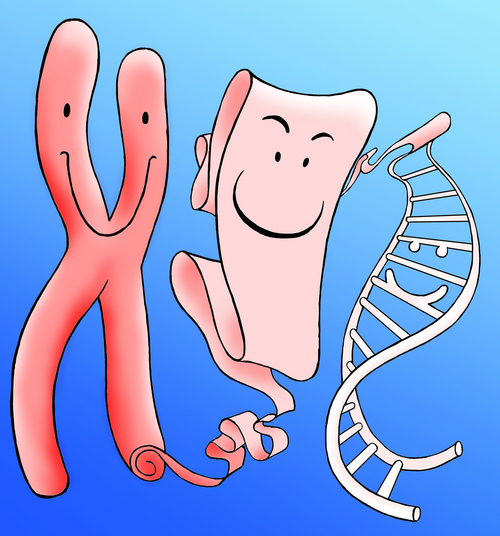 First, let’s go over some basics, starting with DNA. DNA is the name of the chemical that our genes are made from. The letters ‘DNA’ stand for Deoxyribonucleic Acid (catchy, isn’t it?). Not surprisingly, nobody really uses the full name - DNA is a lot easier to say and remember.

DNA is what we inherit from our parents, and they inherited theirs from their parents and so on. Our DNA decides who we are, what we look like and how we grow. Things like our hair colour, eye colour, height, whether we are male or female and even aspects of our personality are all decided by our DNA.

DNA is the name of the chemical, but genes are what we call the instructions that are stored in the DNA. We have a lot of genes - around 23,000 genes to be exact in the cells of our bodies. Each gene is a set of instructions - like a recipe. A gene tells the cell how to make a chemical called a protein. Proteins are the machines that do all the important stuff in our cells, from making chemical reactions happen to passing messages from one cell to another.

With the basics covered, let’s take a look at the Huntington gene. Sometimes changes (called ‘mutations’ by researchers) happen within chromosomes or genes. These changes can alter the way the body works and cause genetic disorders. Even a tiny change in the gene can cause a dramatic change in the protein. Imagine a recipe that told the chef to cook a pie for 400 minutes instead of 40 and you’ll get an idea of how small spelling changes in our genes can cause big problems. 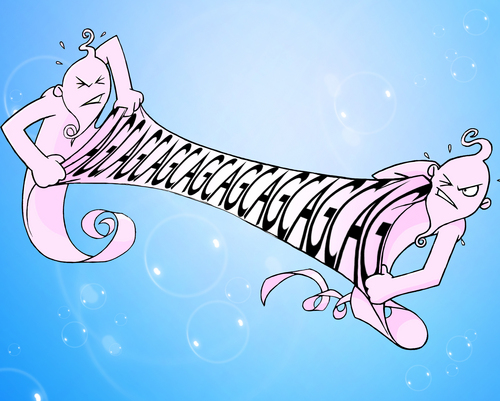 If you are wondering why the stutter in the Huntington gene is called a CAG repeat, well, rather like ‘DNA’, it is an abbreviation for some complicated scientific words. Basically DNA is made up of four bases, which are known as adenine (abbreviated A), cytosine ( C ), guanine ( G ) and thymine ( T ). These bases are the code behind all our DNA and genes. Each gene has a different code and, well, scientists are lazy and don’t want to write out all these complicated words all the time so they just use the short versions. So the four DNA bases are known as A, C, G and T, and if someone was to write out a gene code it would look something like this: AAGTCCTGACTGGGACCTTGAGA CCTAG.

If a gene is like a recipe, then the bases are like the alphabet of letters that make up the instructions in the recipe. Genes just use a very simple alphabet with four letters to choose from. But spelling is just as important.

The gene that causes Huntington’s disease contains a section where the bases C, A and G are repeated many times - the ‘CAG repeat’. Most copies of the gene contain between 10 and 20 repeats, but sometimes the repeat gets longer and that’s when it starts to cause trouble.

What causes the development of the disease is the number of times the CAG is repeated. Put simply, people who develop Huntington’s disease have longer CAG repeats than those that don’t. To make things easier to follow, we will split the CAG repeats into four different ranges. Only one of the copies has to be expanded in order to cause problems.

Repeats in the middle range between 27 and 39 are quite rare. They’re a bit less straightforward, and in fact scientists don’t understand them fully, so they’re sometimes referred to as the ‘grey area’.

The good news about repeats between 27 and 35 is that person will not develop Huntington’s disease themselves. However, there is a small risk (around 5%) that the person’s children might be at risk of HD. That’s because repeats in this range can increase when passed on to a child, by increasing into a range that can cause that child to develop HD.

FACT: CAG repeats are what the lab technicians' count when people have genetic testing for Huntington’s disease. 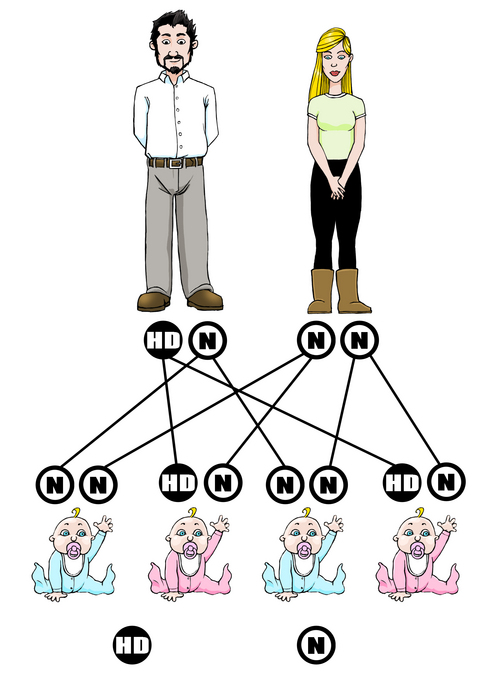 People get Huntington’s disease by inheriting the expanded gene from a parent. Because we inherit one copy of each chromosome from each parent, we end up with two copies of each gene - one from mum and the other from dad.

So, a person with Huntington’s disease has two copies of the Huntington gene, one of which is expanded (with a lot of CAG repeats) and another which is normal.

That makes the risk of having inherited the expanded gene 50%.

Technically there are four possible outcomes with regards to the genes being passed on (as the illustration is highlighting). Two of these outcomes end up with the child having the expanded gene and the other two do not - so the chances are 50%. But to make things easier to understand you can rule out the parent who does not have Huntington’s disease, and just focus on whether the child inherits the expanded gene or the normal one from the parent with Huntington’s disease. Either way, it is still a 50% risk.

Whether a person inherits the expanded or normal gene is purely down to chance, and that’s why you may hear people compare the risk for Huntington’s disease to the flip of a coin. Each individual has their own 50% risk too, so it is like everybody having their own coin to flip with regards to their own risk. 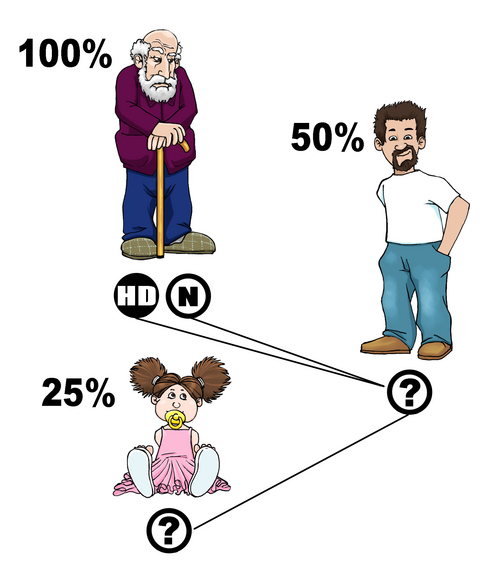 For some though, the risk is not always as straightforward as 50%. For example, if a child’s grandparent has Huntington’s disease, but the child’s at-risk parent hasn’t been tested, then the child has a 25% probability of having inherited the gene.

If the parent doesn’t have the expanded gene, then the risk drops from 25% to 0% - meaning there is no risk at all to the child. It really all depends on which genes the parent inherited. Until we know, the child is at 25% risk.

If a person has one expanded gene and one normal gene, how come it’s the expanded gene that takes control and causes Huntington’s disease? Why doesn’t the normal gene fight back? Well, look no further than the term ‘autosomal dominant’. Unfortunately Huntington’s disease is what is known as an ‘autosomal dominant disorder’, which means that even though only one copy of the two genes is expanded, it will still be enough to cause the disease. In other words, it dominates over the other normal gene. That’s why it only takes one expanded gene to cause the disease, rather than two.

Overall, this section has explained that the gene which causes Huntington’s disease is expanded because it has too many ‘CAG repeats’ in it, and that these CAG repeats are split into four ranges. We’ve looked at the risk of inheriting Huntington’s disease and how that works. And despite some complicated terms like ‘autosomal dominant’ hopefully we have done more explaining than confusing. If you do have any questions though, feel free to use the Ask a question section, where the experts will provide some excellent answers, or alternatively you can contact HDYO directly if you wish to ask privately.